Often I'm asked how I go about making the Shakespeare pieces, so here we go! 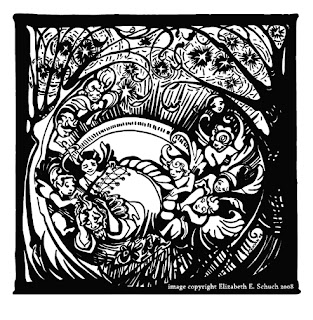 HOW I DID THAT: Assignment 1- Merry Wives Woodcut

This weekend I had an assignment: creating a new piece for the Shakespeare Series with a special challenge- it had to look a bit like an old woodcut with a modern graphic feel.

Featuring a scene from "The Merry Wives of Windsor": ( a play written by request of Queen Elizabeth, who wished to see Falstaff in love) in which the jolly old swine has been tricked by moonlight in a garden. Hordes of children dressed as fairies attack him instead of the tryst he'd hoped for...

So, I started with a very rough sketch of the layout of the scene. I wanted it to be square overall with a round focus around the moon and Falstaff. The fairies could circle around, and then trees could embellish the garden-y box to frame the scene.
Here's the first (thumbnail) rough draft, the kind of thing I usually sketch on a bus or train when I first get the idea: 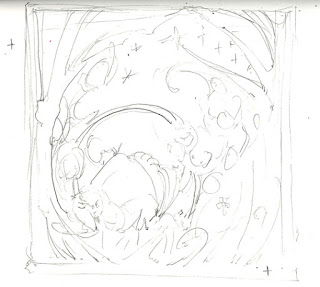 Next step is to take some tracing paper and fill in finer detail. You notice the little crosses outside the picture- those are where I align the tracing paper. In the tracing, I use a compass to lay out the moon, and then I begin to make the trees more graceful. With another sheet, I begin to play with and firm up where the fairies will be placed
. 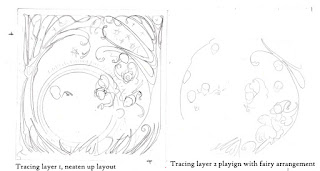 After that, I needed some practice drawing Putti- style fairies, as I hadn't drawn cherurbs in quite some time. I also started looking for clues in woodcut research as to how to go about making the details, shading and stars.

Usually I just do an Art Nouveau-Mucha style outline and paint in details after, so this was to be a little different. I love all the detail in the old woodcut you see here, but the final might be printed on rough fabric, so I'd need to keep details fatter and more simplified. 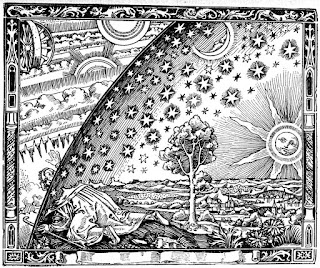 From there, I scanned the rough drawings, adjusted in photoshop to make them faint lines, printing them out lightly so could clean up the details and finalize the background in pencil.

With the finished background pencils in place, I scanned and printed that out very lightly to begin the character sketching on. In photoshop, I layer the drawings together with various transparency to show all the linework. 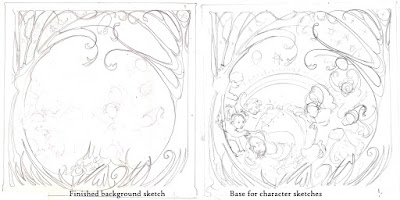 Since I'd be doing the black inking with a fat marker to simulate woodcutting, I didn't work too delicately in the character pencils. Using ideas from my Putti sketches, and an old drawing of Falstaff I'd done, I fill in faces and costumes, with good ideas for light and shadow. 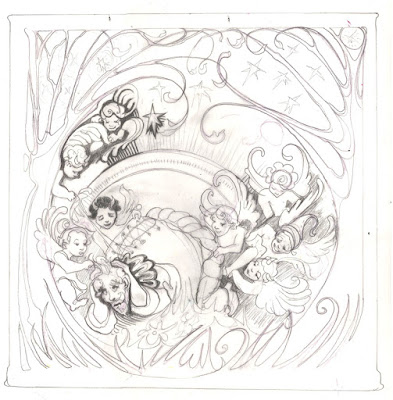 On a separate sheet of paper, I begin to ink a copy of the background with a few different
sizes of permanent marker. At this point, it starts to look like the final drawing. 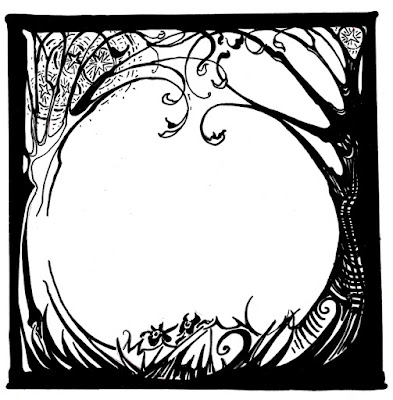 Back in photoshop, I'll slap that pencil lightly on top the nice finished ink background, print it out, and finish it off with marker. 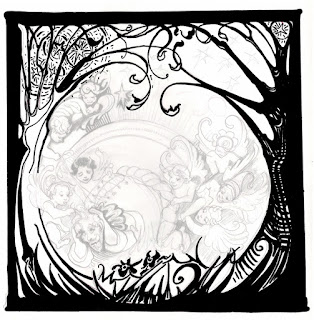 Now, I don't always use this many scans-and edit- and print layers, but this drawing had a lot of detail to track, and I prefer to print out a copy and paint/ink, rather than ruining a good original pencil sketch. The tracing paper is something I've relied on since my scenic drafting days in college and on the advice of our instructor Joe Nieminski, who traced and had incredibly neat drawings.

And then after inking on the character pencils, we have the final drawing, which I brought into photoshop one last time to make the black/white contrast perfect, and to use a hint of the Cutout filter, which does a very nice job of making my marker look less fluid and more carved.