So, outside of drawing for my Immortal Longings art, there's quite a bit I've been up to...
After much neglect - I've given my portfolio a brush- up. 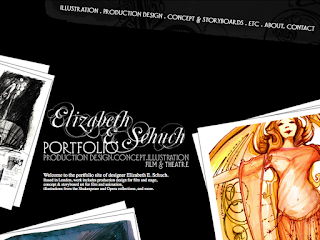 My first career is as a production designer for theatre and film, where I've been working on set and behind the scenes of a mad range of subjects: costumes futuristic communist stunt sequences, the silk road of China, sci-fi, Romeo and Juliet set in Portugal's football teams, lizard costumes, trenches, modern psychodrama and more.

I've even designed an add for ITV Bingo Party Gaming. Who knew?
It's always a surprise what the next job holds..

Other drawings on show dip into architecture and children's books,
and my weird little sketchbook thoughts.

It's all there. (Okay, I've one or two more things to add, but):
PORTFOLIO: www.eschuchdesign.com
Posted by E. Schuch 1 comment:

The Taming of the Shrew

"I'll not budge an inch."
-William Shakespeare
The Taming of the Shrew 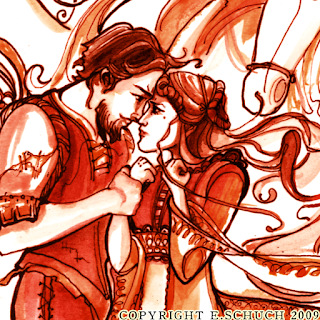 It's been an uphill battle indeed. I've had a version of this one knocking around the studio since I began the first 10 of the Shakespeare Series in 2004. Yup, 5 years later, I finally had one I could publish.

It's the dynamic of Katherine and Petruchio that made it so tough.
Do you show a "tamed" shrew- victim of an abusive and domineering suitor?
Do you make her mid-fight and aggressive, perhaps making her too harsh and unsympathetic?
Or do you sling her over the back of a horse kicking and screaming? That's a bit too much and too comic. (Though I did toy with a version of that.)
And Petruchio- is he lecherous and abominable- in it for the bet, the money and the cheap thrill of demeaning her? Or does he really love her fighting spirit and it's all bravado for show?

It's a tough one to get right.
And somehow, I did think the horse should be in there, though don't ask me why.

You'll see my first attempt- too melancholy and Kate is too obviously a victim. 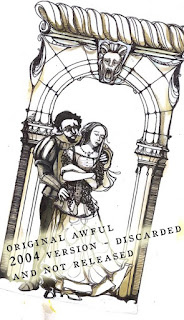 And my second attempt- just appalling really. Too comic. And Petruchio still looks a bit too creepy. And again with the victim thing, albeit a fighty victim. 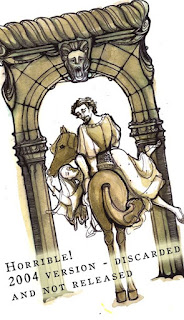 At last, I hit upon the idea of the dance/fight. Petruchio has just swung Kate around to him, rather savagely by the wrist. But chin upon and forehead butted up to his, she's strong enough to take it. Next she'll kiss him or sock him in the nose. 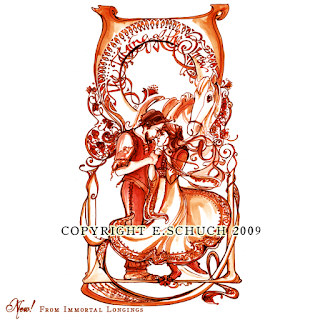 With a happy floral be-ribboned arch, this is another of my favorite "romantic looking- but slightly amiss" designs that disguises a battle with flowers and movement.

Who knows what the horse thinks of it all.

Once the idea was there in a rough sketch, I was able to complete this in one night's work.
Not bad after 5 years of wrestling for the right idea!

Here you can see me take the sketch in stages:

1. Rough sketch for placement and movement.
2. Frame-Layout detail. Often involves rulers, compasses. Always my cheap papermate pencil.
3. Human poses: used photo models for this. Pose your friends, click, and there you go- perfect assemblage of hands and noses. Great for those tough poses. Sometimes the figures are done in my head, and sometimes that little bit of help is great.
4. Putting the layout together, matching of the characters and frame, still pencil. Some shading.
5. Inking, and making it all clean and pretty. A copy of the pencil layout is printed out (in case I mess up the ink) and I ink on top of it until satisfied or my eyes go buggy. Tiny black pens for details- the G-tec C4 and any random gel ink for thicker lines.
6. Paint! Watercolour and ink (Sennelier is my favorite) complete the look. Several cups of tea have been consumed by this point.


This design will be premiering on cards at the St. Lawrence Shakespeare Festival giftshop,
and is on sale on prints now at my Etsy Shop.
Posted by E. Schuch No comments: 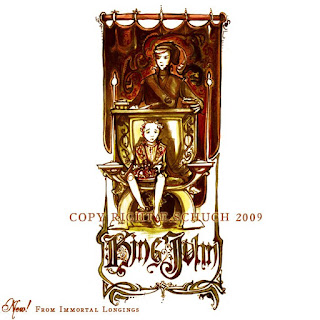 This one has been hiding in the bottom of the pile of drawings on my desk for some time now, it's colour just wasn't right. But with some rich browns and gothic flourishes, it's time for it to see the light of day. King John! 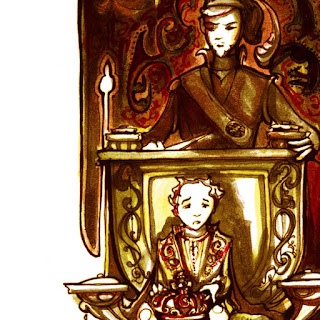 The tragic young Prince Arthur sits uneasily upon the throne of England. Illegitimacy and family quarrels over the throne have lead to the order that the boy be killed. An assassin stands over the boy. Hubert wasn't able to kill him in the play, but later the boy falls to his death escaping.

The play is full of double crosses, poison and intrigue, and the poor Prince was caught in the middle. The scene of Hubert's attempt to kill him is very powerful on stage and stayed with me when I decided to illustrate it.

I'm listing all my new print designs in my Etsy shop today.
And just about ready to show a design that has alluded me for years: The Taming of The Shrew!
Posted by E. Schuch No comments:

New Design!
All's Well That Ends Well
A lovely sentiment in these times.

This play was a bit of a problem to me, as it has a sweet and fairytale-like concept, but winds up with bed-swapping and a rather forced marriage. Sounds like a plot line off a modern romantic comedy... 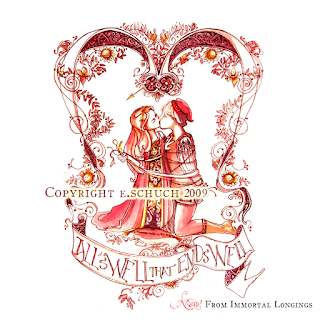 At a glance, it's a girly wedding cake topper of an illustration.
Until you look a little closer at how our Bertram is being held in place for the posed kiss.
The title implies a little addendum - "All's Well That Ends Well (I suppose...)"
Bertram's not exactly a prize, and Helena is clever but for her dubious taste in men.
I guess we'll have to hope for the best for them!

The flora and banners are all aimed at distracting the viewer from the uncomfortable situation, fun and frippery- as with my Much Adoe About Nothing.
It really is themed after a cake topper, I admit. 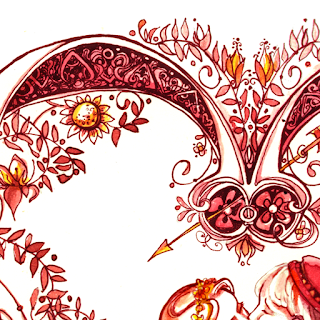 Available soon on prints, cards and more.
Posted by E. Schuch No comments: 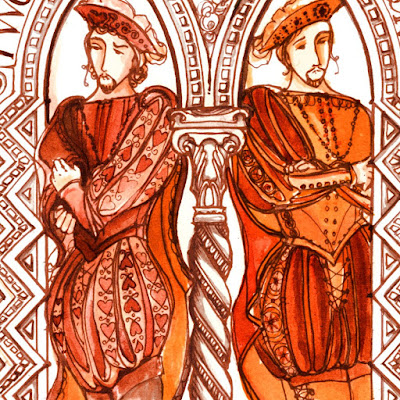 Just finished late last night!
We've our two rather shifty-in-love Gentlemen, a cameo of the lovely Sylvia in the archtecture above, and an actual Verona window design for the frame.

Male friendship vs. romantic attachment, and some rather fickle turns of affection feature in this Shakespeare play. I first saw a version of this at Chicago Shakespeare Theatre years ago. 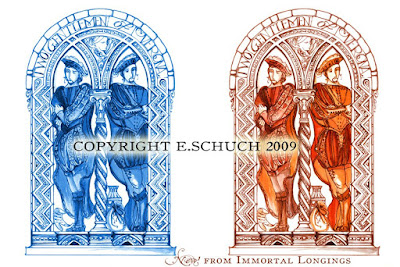 In the illustration, I wanted a blend of masculine and feminine elements- hence the rigid design repeats and right angles in the frame. The costume and rather effeminate poses of the gentleman betray my sketicism as to whether they make worthy heroes to the play. Above, the lovely ideal of Sylvia hangs above the proceedings, more an idol or trinket than a real person to these gents.

As I can't decide between the warm colour and the blue version, Two Gents will be available in two colours. Available soon in my Etsy shop!
Posted by E. Schuch No comments: