Elizabeth E. Schuch, a.k.a. immortallongings, is a London-based designer whose award-winning artwork, The Immortal Longings Series, is currently featured in Shakespeare's Globe Shop in London and in theatres internationally. Her Opera Series illustrations can be found at The Metropolitan Opera in N.Y.C., and current projects include storyboarding a BBC TV show, and designing a circus theatre production.
You can find out more at the Immortal Longings website and blog.
In a suitably Shakespearean twist, the time-honoured playwright becomes our muse on his birthday today, as Elizabeth takes us on a tour via Etsy items of some of his most well-loved works.
As an illustrator and designer, I look to the world of theatre for my inspiration. Velvet curtains, bustling around in the dark behind the scenes, bright lights, opening nights, thrilling drama... it's an addictive place.

It's no secret that I'm fascinated by William Shakespeare, and it's more than just the loveliness of the verse. The characters themselves, and the moods that surround each poem and play are magical.

Photos via sadieolive
So, to celebrate and set the stage for the birthday of the Bard, I suggest conjuring up the mood of your favourite kind of Shakespeare...

"Eternity was in our lips and eyes,  Bliss in our brows bent."— Antony and Cleopatra

Do you dream of ancient times and glamorous indulgence? Cleopatra, last Pharaoh of Egypt, was famed for her historical skills of seduction, and inspired some thrilling quotes in Shakespeare's Antony and Cleopatra. Find some linen, grapes, and feather fans, and just recline.

Longline Under Bust Corset by electradesigns, $349.

Spinx and Falcone Pendant from ParadiseFindings, $9.95. "To sleep, perchance to dream." — Hamlet

Do you prefer a more brooding sort of Shakespeare? Take the melancholy Danish prince Hamlet as your guide. Grab a handy skull, adorn yourself with blackest black, forsake friendship and exercise, and retreat to a quiet window to ponder the meaning of it all. You may also plot revenge, but please don't seek to carry it out, as that would spoil the atmosphere. "Give me my Romeo; and, when he shall die,
Take him and cut him out in little stars,
And he will make the face of heaven so fine
That all the world will be in love with night
And pay no worship to the garish sun." — Romeo and Juliet

Whether the courtship is comprised of witty banter or shy glances, and whether it ends with wedded bliss or tragedy, Shakespeare's lovers are some of the world's most intriguing.

If Romeo and Juliet describes your approach to love, let yourself run away with the romantic. Have a secret breakfast in your boudoir, dress for a masked ball, or pine away on any convenient balcony. Kiss Me, Kiss Me Now Print by vincenzorizzo, $10.

"The lunatic, the lover, and the poet, are of imagination all compact." — A Midsummer Night's Dream
Use Shakespeare as your writing mentor to wax poetic. This is best done by moonlight, with a good quill and your best journal, wearing a velvet cap and with a bottle of your preferred indulgence at hand. "We are such stuff
As dreams are made on; and our little life
Is rounded with a sleep." — The Tempest
Are you drawn to faerie dust and enchanting spells, or to Pre-Raphaelite tragic heroines? Cultivate a dreamy Ophelia disposition. Start by wrapping yourself in a filmy gown, then dip your toes in a warm bath strewn with flowers. Humming distractedly helps, but is not required. Dawn Of Spring Print by urbandesign, $30. Silence Print by abbytrysagain, $11.
However you decide to celebrate, Shakespeare's birthday is a brilliant excuse to enjoy the dramatic side of life. The rest is silence.
Many thanks to Elizabeth for sharing her passion for the UK's beloved poet with us! Check out her incredible work in the Seller's Items and more of her Shakespeare-inspired picks in the Related Items.
Posted by E. Schuch 1 comment:

And now to reveal the brand new Tudor Series!


Yes, I'll admit to being dreadfully addicted to Tudor and Elizabethan history.  My library shelf and audiobook collection can attest to it... But the drama of the court life, and the art accompanying it is fascinating...  (See more on Henry & his relationship to art on this BBC Show, in the UK only, while you can.)
Three portraits begin the series, and for them I've used a mix of contour and crosshatch inking.
All are inspired by contemporary portraits of the period.
Also, I've illustrated my own version of the Tudor Rose, here, with Henry VIII initials. 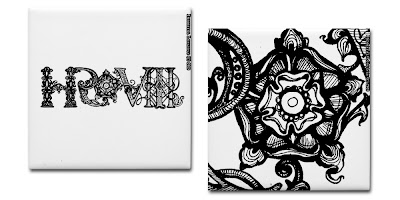 The signatures of Anne and Katherine are based on their own handwriting. 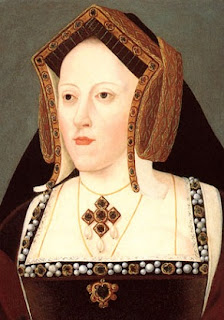 My sympathy and admiration go out in turns to Anne Boleyn and Katherine of Aragon.  Queen Katherine is depicted in her later years, with a penetrating gaze, and strong determination not to back down.  "Humble and Loyal" was her motto, I especially admire her dignified self defense. 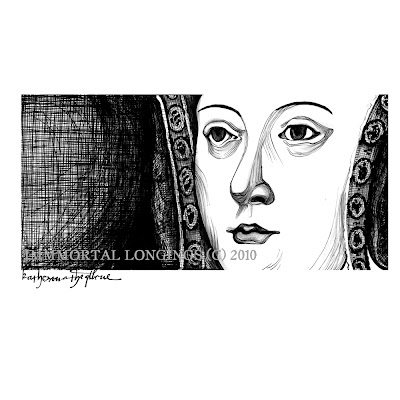 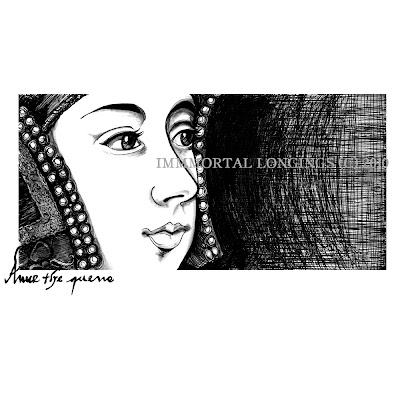 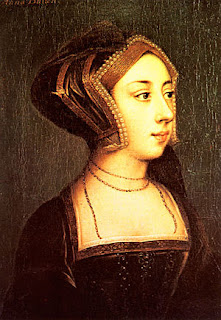 With Anne Boleyn, I feel like the deep set eyes and strong nose of the painting attributed to Holbein is the most lively version of Anne.  Admittedly, the Holbein sketch may not even be of Anne, but other portraits show her stiff or sour, and I can't quite picture the real figure behind them.  Scheming and cruel in her rise, she showed such bravery and composure in her death sentance that one can't deny her a share of respect.    "The Most Happy" was her motto, and  you'd have to think she regretted that one later. 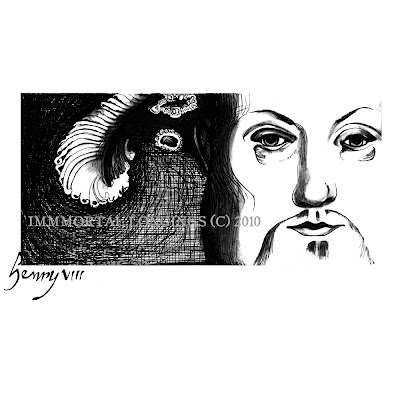 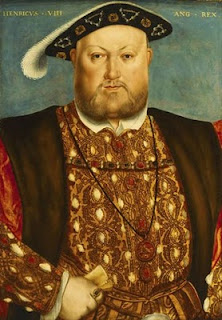 And King Henry, the most recognizable (and sizable) of monarchs.  Intelligent and dangerous to be close  to, he must have been terrifying to be on the bad side of.  His arrogant gaze and squinting eyes are unsettling.


The Tudor Prints are now on sale in my Etsy Shop, and you'll find Journals and Tiles on CafePress.
Coming soon on leather goods and mirrors to my Etsy shop... 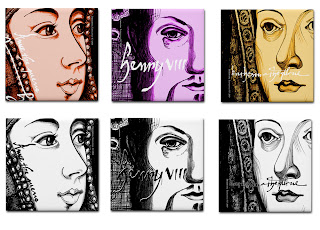 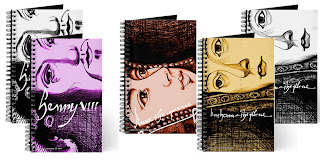